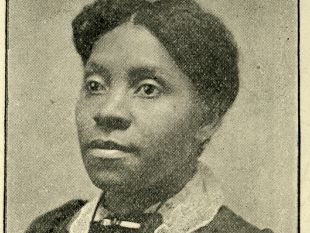 Elizabeth Freeman was born into slavery about 1742 in Claverack, New York, belonging to Pieter Hogeboom. Elizabeth was given the name ‘Bett‘. When Hogeboom daughter Hannah married John Ashley, of Sheffield, Massachusetts, who at the time served as a judge of the Berkshire Court of common pleas. Hogeboom gifted six month old Elizabeth to the newlyweds.

Elizabeth remained with the Ashley’s until 1781, during this time she had a child named Betsy. It was said she was married, but no record was of marriage were found. It was also said the her husband never retuned from service in the Revolutionary War. Elizabeth and her daughter suffered physical abuse from Hannah, and in 1780, Elizabeth prevented Hannah from striking Betsy with a heated shovel; Elizabeth shielded her daughter and received a deep wound on her arm. As the wound healed, Elizabeth left it uncovered all winter as evidence of her harsh treatment. In 1781 Elizabeth escaped the Ashley’s home and refused to return. She found refuged with a sympathetic young abolition lawyer Theodore Sedgwick, who welcomed Elizabeth into his home to serve him and his family.

One night while serving dinner to the Sedgwick’s and their guest, Elizabeth heard them speaking of freedom, and the Constitution of Massachusetts “Declaration of Rights”

“Article I. All men are born free and equal, and have certain natural, essential, and unalienable rights; among which may be reckoned the right of enjoying and defending their lives and liberties; that of acquiring, possessing, and protecting property; in fine, that of seeking and obtaining their safety and happiness.”

Elizabeth applied the concepts of equality and freedom for all to herself. Inspired by the words Elizabeth sought counsel from Sedgwick. He willingly accepted Elizabeth case, as well as that of a man named Brom, another of the Ashley’s slaves. On August 1781 the case of Brom and Bett v. Ashley was heard before the County Court of Common Pleas in Great Barrington. Sedgwick asserted the Constitutional provision that ” all men are born free and equal”. When the jury ruled in Elizabeth favor, she became the first African American women to be set free under the Massachusetts state constitution.

The Jury found that “Brom and Bett are not, nor were they at the time of the original writ the legal Negros of the said John Ashley…”. The courts awarded damages of thirty shillings to both Brom and Elizabeth.

After the ruling, the Ashley’s asked Elizabeth to return to their home and work for wages, but she chose to work for the Sedgwick’s instead. She worked for the Sedgwick’s until 1808 as senior servant and governess to the Sedgwick children, who called her “Mum Bett”. Elizabeth died on December 28, 1829 leaving behind four children, although her age was unknown, it was estimated that Elizabeth was about 85 years old at the time of her death.

“Any time, any time while I was a slave, if one minute’s freedom had been offered to me, and I had been told I must die at the end of that minute, I would have taken it—just to stand one minute on God’s airth [sic] a free woman— I would.”

The words from great people